Barton McGuckin was a renowned tenor opera singer who mainly toured Great Britain with the Carla Rosa Opera Company but also gained success in oratorio and concert. He began as a choirboy in Armagh Cathedral where he studied singing, organ, violin and the piano. In 1871 he became the first tenor at St. Patrick’s Catherdral in Dublin where he was a pupil of Sir Joseph Robinson. He appeared in the Crystal Palace concerts in 1875 and went to Milan to study with Trevulsi. 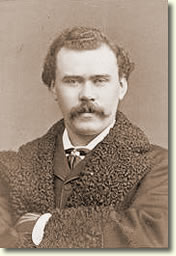 In 1880 he bagan with the Carla Rosa Opera Company and remained with them at Theatre Royal, Drury Lane until 1887. He achieved great success both at singing and acting and created several important roles in A. Goring Thomas’s Esmeralda, Alexandra McKenzie’s Colomba and Massenet’s Manon. He began a 2-year tour of the USA in 1887.

At the end of 1888 Barton returned to London to perform in Hubert Parry’s oratorio Judith. In 1892 he was called to perform in Berlioz’ Damnation of Faust when the Halle Orchestra gave two concert performances in London. He then went on to take the title role in Arthur Sullivan’s Ivanhoe. McGuckin’s other principal roles were in Lohengrin, in Faust (Gounod), as Don José (Carmen) and Eleazar in Halévy’s La Juive.

McGuckin continued to sing into the early 20th century, and made several recordings. He sang at the Philharmonic and Monday Popular Concerts, and at provincial festivals. In 1905 he became director of an amateur operatic society in Dublin, and was conductor of orchestral concerts at the Irish Exhibition of 1908.

Guild of One Name Studies