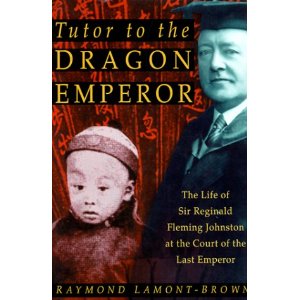 Academic, diplomat and tutor to the last Emperor of China. Johnston was born in the Morningside district of Edinburgh, the son of a lawyer. He entered the University of Edinburgh, but discontinued his studies there to take up a place at Magdalen College, Oxford (1894). In 1898 Johnston joined the Colonial Office and was posted to Hong Kong, becoming a District Officer in China. Johnston became famous as the tutor to Pu Yi, the Last Emperor of China and as the first foreigner to enter the Forbidden City of Beijing. In 1919, Johnston elected to take on the teaching of the 13 year old, having a great influence on the emperor, whose trust and friendship he gained. As Chinese Nationalism swept through the country in 1924, Johnston was forced to flee. He returned to Britain, becoming the Professor of Chinese at the University of London.

In 1934, Johnston looked for a residence in Scotland to retire to. He found a house on Eilean Righ, a small island in Loch Craignish, some 9 miles (15 km) NW of Lochgilphead. He moved there with his enormous library, which included a Chinese Encyclopaedia in 1734 volumes and a complete collection of Buddhist scriptures in 1500 volumes.

Johnston died in Edinburgh and was quietly cremated at Warriston Crematorium, with his ashes scattered on his beloved Eilean Righ.

Sir Reginald Fleming Johnston is not an extremely well known figure but many have heard of him thanks to two sources; his memoir “Twilight in the Forbidden City” and the award-winning film “The Last Emperor” in which he was portrayed by Peter O’Toole. He was a committed monarchist and endured much because of this, particularly because of his staunch loyalty to his pupil and friend HIM Emperor Xuantong aka “Henry PuYi”. Johnston was born in Edinburgh, Scotland and in 1898 entered the British colonial service working in Hong Kong and Weihaiwei, China. A noted scholar he was known for his extensive studies of China; the language, history, culture and customs. In 1919, as part of an effort to build ties with the British by the Imperial Household Department, Johnston was employed as tutor to the 13-year-old Manchu Emperor.

Johnston and his pupil soon became fast friends and Johnston was one of only 2 foreigners to live so closely to the Emperor in the Forbidden City and the Summer Palace. He was given a number of honors and could be seen wearing a Chinese gown and being carried in a sedan chair like a Qing dynasty official. The Emperor appreciated his candor and his extensive knowledge of the outside world he knew so little about. He also saw him as a true friend, devoted to him personally and not trying to use him to advance himself as so many others clearly were. Johnston appreciated the Emperor’s idealism, curiosity and desire to enact reforms and become a modern monarch. Both of them maintained hope that the Qing monarchy could be restored. 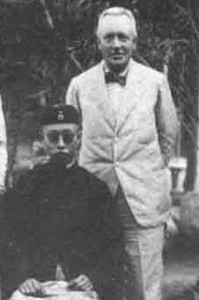 The two remained very close until the Emperor was expelled from the Forbidden City in 1924. A few years later Johnston was assigned as Commissioner of Weihaiwei which post he held until the Republic of China took control of the region in 1930. The following year he became Professor of Chinese at the University of London but still kept in touch with his old pupil and was hopeful that the move to Manchuria and the creation of the Empire of Manchukuo would be the dawn of a new era for the Qing monarch. The last Emperor wrote the forward for his book “Twilight in the Forbidden City” and Johnston wrote of the move to Manchuria,”in the earnest hope that, after the passing of the twilight and the long night, the dawn of a new and happier day for himself, and also for his people on both sides of the Great Wall, is now breaking.”

Johnston retired from teaching in 1937 and moved to the island of Eilean Righ which he had purchased and where he built a Chinese garden and kept his Chinese robes, honors, documents and artifacts in a special Chinese-style room. He attracted quite a bit of criticism during the days after the oubreak of World War II in Asia for continuing to fly the Manchukuo flag over his island, a display not of any political approval of Japanese actions but of his unfailing loyalty to his friend the Emperor and his continued belief in his potential to be a good monarch for China. He never married but was engaged at the time of his death the following year in 1938.