During the recent World War there were many American business men, who though practically retired from active business duties, came again to the front at their Country’s time of need, and who were important factors in many phases of the work necessary to carry on that great struggle to a successful close.

One of these men was William Morgan Lasbury, of Broad Brook, and Enfield, Connecticut. He possessed capabilities of great value, which he used untiringly, thereby receiving well-deserved merit. 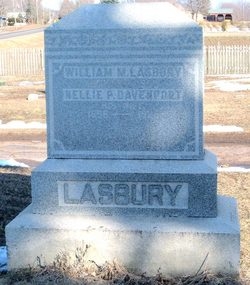 The name of Lasbury is derived from Lasborough, a parish in County of Gloucester, England, a section long famed for its citizens. George Lasbury the father of our subject was a son of Benjamin Lasbury and Sarah Lasbury (nee Teakle). The latter lived and died in England, and after his death, his widow, Sarah, came to America, where she resided with her son, George, until her death, which occurred in the early seventies.

George Lasbury, above mentioned, was born in England, October 25, 1819, and died in 1906 at Broad Brook, Connecticut. At an early age he left home and school to help his parents, as he was the oldest of a large family of children. He was employed in the woolen mills of Bradford, England, his native town, and by his industry worked up until he became overseer of fulling. He learned the trade of finishing. He married (first) in 1840, in England, Fannie Sylcox, and came to this country alone the following year.

Speaking the same language, feeling the brotherhood in our Common ancestry, he became an American in the best sense of the word. His wife and son arrived in America a year and a half later, and they located at Webster, Massachusetts. Mr. Lasbury worked first in the mills of Lowell, Massachusetts, then later removed from there to Broad Brook, Connecticut, where he resided for about fifty years.

By industry and economy he saved enough from his modest income to buy a farm in the southern part of Broad Brook. Enjoying the respect and confidence of the people of all the vicinity, he spent his last years on this place, and his memory is still honored by all who knew him.

Mr. Lasbury married (second) in 1854, Sarah Morgan and their children were Mattie M., resides in Redding, Massachusetts; William Morgan, the subject of our sketch; and George B. of Omaha, Nebraska. Mrs. Sarah (Morgan) Lasbury died in September, 1865.

The family have long been members of the Congregational church of Broad Brook. William Morgan Lasbury was born November 15, 1857, in Broad Brook, and attended the schools of that town, and the Eastman Business College of Poughkeepsie, New York. Subsequently he entered a country store as a clerk and after gaining sufficient experience, he purchased a store in Hartford, which he conducted for two years. He was then in the employ of the Belding Brothers Company, silk manufacturers, for three years as a bookkeeper. Returning to his native town, he secured a position with the Broad Brook Woolen Company and this marked the beginning of a career in the manufacturing business that has been one of marked success. He rose through various grades as his abilities increased and became paymaster, then assistant superintendent, and eventually superintendent.

From Broad Brook, Mr. Lasbury went to the American Woolen Company of Boston, and there he was in charge of the Fitchburg Worsted and the Beoli Mills of that company, both located in Fitchburg, Massachusetts. He was later transferred to the Assacet Mills at Maynard, Massachusetts. At the latter place there were twenty- eight hundred employees, being the largest mill in the world.

In 1914 Mr. Lasbury retired from the cares of business, and purchased a farm on Enfield Street, in the town of Enfield, having decided to take a complete rest. His health had suffered severely through the ardous cares of his work and for a year led a quiet, peaceful life on his farm. In 1915 he was urged to return to the American Woolen Company, and assumed charge of the Worsted Division of the eighteen mills, of thirty five thousand employees.

Then came the outbreak of the war and the great work of preparation began. One of the most important items was the clothing of the soldiers, and second to that was the having in charge of the selecting of this material, a man of high integrity, broad experience, and with a natural love of country and honor. Such a man is Mr. Lasbury, who during the war held this responsibility, being a member of the Fabric War Committee, and performed the duties involved in a manner that has brought him material success and a position of honor.

Mr. Lasbury is now retired, living on his beautiful farm.

The latter married Ann While, and resides in Brookline, Massachusetts; he is in the employ of the America Woolen Company of Boston.

Guild of One Name Studies