LASBOROUGH in the county of Gloucestershire 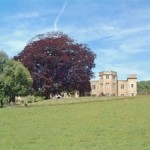 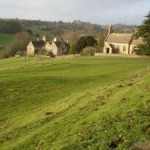 Lasborough Church is dedicated to St Mary and was rebuilt in 1861-2 by Lewis Vulliamy for RS Holford of nearby Westonbirt. Lasborough Manor, below the church is the south wing of a larger manor house built in the very early 17th century for Sir Thomas Estcourt. The main manor house and north wing were demolished in the 19th century

“LASBOROUGH, a parish in the hundred of Longtree, county Gloucester, 5 N.W. of Tetbury. Wootton-under-Edge is its post town. The parish, which is of small extent, is situated in a valley near the Bath and Cheltenham road. The soils consist of brash and oolite. The land is chiefly arable and the remainder in sheep walks. The living is a rectory in the diocese of Gloucester and Bristol, value £150. The church, dedicated to St. Mary, is a small stone structure containing one bell. R. S. Holford, Esq., is lord of the manor.”

The above resources may suggest the Lasbury family originated from Lasborough but my research has found no such link. In fact the earliest records of Lasbury’s can be found in London and in East Harptree in Somerset.