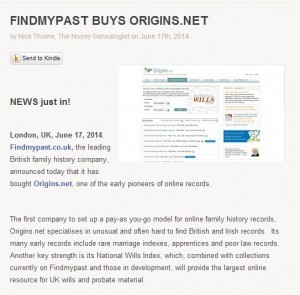 t.co.uk, the leading British family history company, announced today that it has bought Origins.net, one o
f the early pioneers of online records.

The first company to set up a pay-as you-go model for online family history records, Origins.net specialises in unusual a

nd often hard to find British and Irish records.  Its many early records include rare marriage indexes, apprentices and poor law records.  Another key strength is its National Wills Index, which, combined with collections currently on Findmypast and those in development, will provide the largest online resource for UK wills and probate material.

Elaine Collins, Partnership Director of Findmypast said: “We are delighted to bring Origins and its founder, Ian Galbraith, into the Findmypast group of family history brands.  By joining together, we are able to offer customers the most comprehensive collection of British and Irish online records.   This rich collection will help descendants of early North American settlers to bridge the gap to the old country, as well as anyone with UK ancestry looking to delve beyond 19th and 20th century records.”