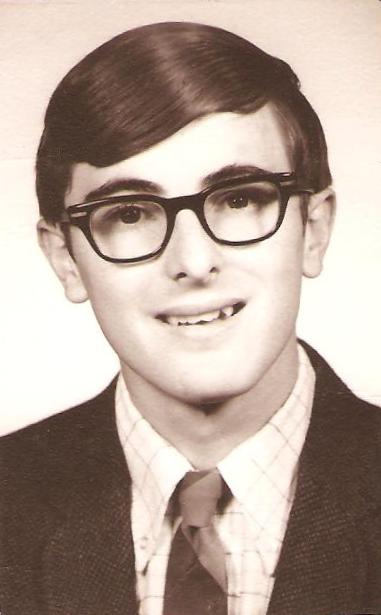 I have recently been contacted by Tim Bowers who was an old school friend of Rickey Dean Lasbury. Tim remembers Rickey Dean very well and has sent a number of recollections. With Tim’s permission I include them below in this tribute to Rickey Dean.

Rick and I were friends in high school… he tried to teach me about building model rockets.  My family moved to Kentucky for my Junior year at EAWRCHS (RICKY’S senior year)…  My parents brought me back to Wood River for the home coming football game 1967. I saw and spoke with Rick at lunch in the cafeteria that day… we were going to get together at the game.  That was the day the car turned left in front of him and he went over and landed on his head — no helmet.  At half time of the football game that night, they announced that he had died.   I don’t know why I thought to GOOGLE for his name tonight — I never knew that his birthday was March 8th (3 days from now)…   I remember when we talked …  he idolized ROBERT GODDARD, father of american rocketry.  He told me once that his goal in life was to have an entry under his name in the ENCYCLOPEDIA BRITANNICA.  Several times I wondered what I could do to make that happen.   I guess he would be 66 this coming Tuesday.

I’d be pleased and honored if you published my email about Rick on your webpage.   I can’t say we were ‘best friends’ but for me he came as close as anyone.   I’ve thought of him often over the years, wondering if he would have earned his PHD and become a famous scientist — or if he would have had a family — or made it into the  Britannica.

More stories about him…
Stories about him appeared in the local newspaper a few times for his model rocket exploits…  He built a rocket sled (like they used to train the astronauts) but ‘mouse sized’ … and sent a mouse for a ride on it…   and he’d built a model rocket with a ‘space capsule’ (carefully padded)  for that mouse .. a multi-stage rocket with a charge to separate the capsule from the rocket after it reached maximum height — then it deployed a parachute and returned the mouse safely to the ground.   I think that must’ve been one of the newspaper stories.

The one rocket project where he let me be his assistant wasn’t that elaborate but a little bigger.  There was a company picnic at a local park – just outside town – for the company his father worked for.   As part of the afternoon’s entertainment, there would be a model rocket launch.  That’s the rocket I got to help with.   It was about 4 feet tall with 2 stages and 6 or 8 “G” type model rocket engines … [very big for model rockets then]   I think he estimated in might reach over 2000 feet — He had to get permission from the local airport, just in case.   There was a small lake at the park — maybe 50 – 100 yards wide.   There was no danger the rocket would explode, but for safety, the launch was one side and crowd on the other side of the lake.   My job was to sight the rocket from “over there” with a ‘compass’ (used to measure angles for geometry class) — knowing the distance I stood from the launch point, and that angle, we could calculate how high it had gone.

Of course, there had to be a couple of eggs in the ‘nose cone’ to prove the parachute worked for a safe return.   They did a count down over the loud speaker — whoosh!   Up it went,  flame shooting out 2-3 feet,  it went up 2-3 times the height of the water tower — 500′ to 600′ feet but it malfunctioned.  I remember the crowd looking up and up  – hands at eyebrows to block the sun…   watching as the rocket arched over — no parachute — and came almost straight down into the crowd (50 to 100 people) with a splat —  no one was close enough to be hit  — the heat of the extra engines had caused them to come loose inside the rocket and slide up, changing the center of gravity.   Still it was impressive.   The whole flight lasted only 10-15 seconds.

One other bit of his personal history — He told me his father was a baseball fan .. and that he named him after Branch Ricky and Dizzy Dean .. old time baseball players – hence “Ricky Dean”.  Rick used to spend hours skipping a tennis ball off the driveway into the side of house to simulate fielding ground balls — I think he wanted to be a second baseman or a short stop, but I don’t remember if he ever played little league or tried out for the East Alton-Wood River “Oilers”  high school team.

The team was named The Oilers because there were several gasoline refineries near Wood River — the land side was dotted with TANK FARMS (huge round tanks 100′ high and 100′ or more across)  where gasoline was stored.    Wood River was a central point on the Mississippi river that ran down the west side of town.  There was a story that Wood River had “strategic significance”  as a national fuel center so it was one of the top 10 targets if the Soviets sent nuclear rockets ~ not a comforting thought, but a point of pride.

I may have the high school yearbook from the last year he and i attended.   If i come across it, I’ll look for mentions of him… and let you know.

Thanks very much for doing this — for keeping the website — for remembering him and all his family.   Rick and his sister both died young.  I thought how sad it must have been for his parents, but don’t have any memories of them.   His sister was just a baby or a toddler when I knew him — if I ever even saw her, it was just in passing.

So thanks again ..,. and bless you for doing this.  I think he would appreciate it.